4 July 2013, Kuta-Bali: On the first day of the inaugural ASC sanctioned 6-star Billabong Pro Bali held at Balangan Beach on Bali’s Bukit Peninsula today, Rounds 1 and 2 of the Men’s Open Division was completed in 2-3 foot waves under clear weather and bright sunny skies.

Arya Gunata soaring high on a 3-4 ft waves of Balangan.

The first pro level event ever held at Balangan Beach, the Billabong Pro Bali was opened this morning by the sounds of Balinese gamelan music and dancing, speeches by local dignitaries, and then the banging of a gong to signal the start of competition.

Banging of a gong to signal the start of competition.

As there were more than 64 surfers lined up to compete in the Billabong Bali Pro, several trial heats were run in order to parse down the field and complete the first round of the 64 man Men’s Open heat draw before getting into Round 1.

The lefthand reef break of Balangan can be challenging for some surfers, as it is a wave with fast-breaking sections that move with the rising and falling tide, especially on a small to medium sized swell such as was on offer today, but those with keen wave selection found plenty of opportunities to put up some good scores.

The wave of the day honor goes to Made “Bol” Adi Putra from Kuta, whose amazing air reverse in Heat 2 of Round 4 earned him the highest single wave score of the day of 7.75 points (out of a possible 10), quite a feat in a heat where no other surfer in his heat scored more than 2.9 points for a single wave!

“Bol” went on to add another 7 point wave for another air reverse to also take home the highest total heat score of the day of 14.75 points out of a possible 20.

The afternoon surfing conditions were challenging on the low tide for the surfers who had the bright sun blazing into their eyes for the last couple of hours. ‘It was pretty difficult out there, I feel pretty lucky to get through that heat, said Wayan “Betet” Merta. The wave was really fast, and used my on my 5’2”. With the conditions if you make two good turns on a wave you get the score. I hope I get through my Round 3 heat and more, on into the final! Thanks to Paul at Billabong for this event and to the judges today.” Round 3 is scheduled for this Saturday. 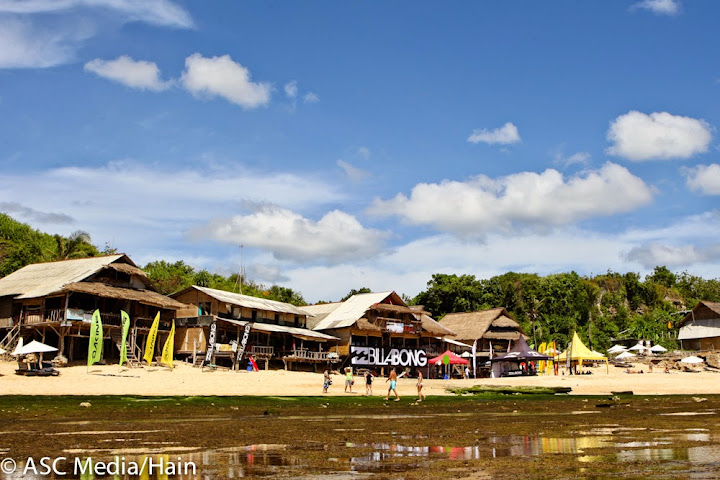 Paul Anderson from Billabong was satisfied with the day’s work, saying, “ Well, it started off a wet rainy day in July early this morning, which is unusual for the Bukit, but it’s turned into a lovely sunny day, perfect for boardshorts. Even though the waves have been small they have certainly been contestable. We’re looking for some better waves over the weekend, and having a great time here at Balangan over the next three days.”

Today we will see the longboard, Women’s and Masters Divisions seeing action, starting off at around 7:30 am.