Bali, Indonesia: Groms from all over Indonesia are preparing for the cobblestone point break waves of Medewi on Bali’s North West Coast to compete in the Ultimate Grom Contest Series next weekend in Medewi, Bali. With 6 stages already complete taking place all over Indonesia, It’s the small coastal village of Medewi which tales centre-stage for the next stop to find Indonesia’s best Groms.

Coming fresh off the last stop in Lakey Peak Sumbawa on the 12th May where the Groms faced heavy barrels, Groms are now preparing for the mellow long rippable walls of Medewi.

Rip Curl’s Top Team rider Oney Anwar took time off in his busy schedule on the World Qualifying Series to help with the last event in his home town of Lakey Peak commenting. The Waves were pumping for the last event – the morning was perfect 3-4 feet and glassy giving the boys a good chance to show off their skills. The kids were ripping and having so much fun! The level of Surfing was really strong too.. It’s good to be back in Lakey judging and enjoying the competition with the Groms from my home town!”

Competition was very tight in both divisions during the Lakey Peak leg of the series. With first place in the under 14’s finally attributed to the powerful Ompu who steamrolled his way to victory with 11.5 points, followed by Arpad (10.4 points), Daniel (8.1 points), Irfan (7.3 points) Bronson (6.8 points) and Idris (5 points). The four first winners were rewarded with Rip Curl goodie bags, Stickers and Sticky Bumps wax.

In the Final of the “Under 16” division, around 20 Groms competed for the coveted prize of a spot in the National finals to be held in Bali in September. The day was not short of drama – During round 1 Dedi Supriadin charged one of the biggest sets of the day resulting in a heavy fall, broken leash and lost board.. After being pounded by the remainder of the set, Dedi finally made it to the channel where he was reunited with his board. One bonus was his beating won him the best  wipe out of the day and some free goodies!

Riman from Lombok took first place in the main Under 16’s division (13.5 points) thanks to a combination of perfect turns and tube rides. Close behind Riman was Andre Anwar from Lakey Peak (11.6 points), Max De-Santis of Hawaii (9.8 points) and Febri from Java (8 points). 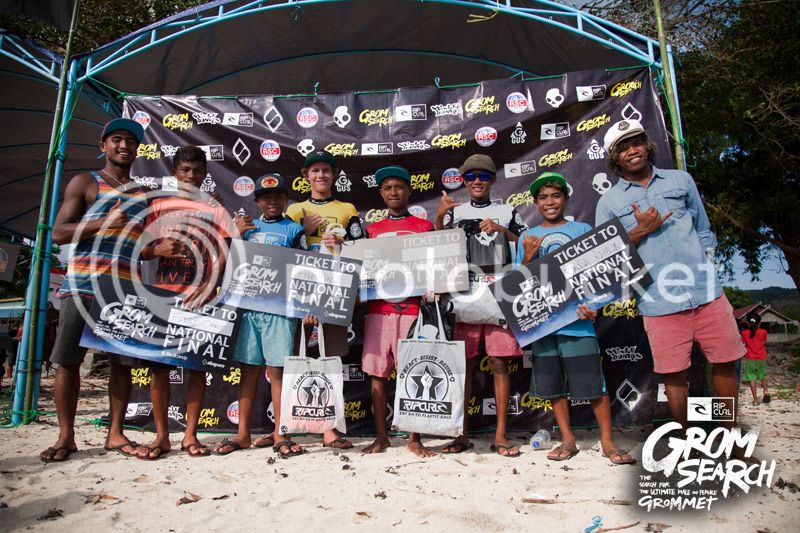 Given that Riman already won a ticket to National Finals at previous GromSearch event earlier in the series, the official winners who join National Finals are Andre Anwar, Febby and Finda from Lakey Peak and Febri from Java.

As far as the expression sessions were concerned, it is Gazalin from Lakey Peak who won the Best Wave thanks to a lengthy and well-maneuvered wave. Halik, also from Lakey Peak differentiated from others by an outstanding figure which brought him to win the best trick of the day.

In addition to the exciting performances in the water, Groms voluntarily cleaned up the beach fulfilling their commitment to environment helping preserve nature and make a great example to other locals and surfers in the area. The Grommets also enjoyed playing games such as a running competition and “the last chair standing” game in a very friendly atmosphere.

Rip Curl Team Rider and Contest Director Dedi Gun said: Everybody worked really hard to organize this GromSearch Series #6. Many thanks to the judges, Locals, Sponsors and everybody that participated in making this GromSearch unforgetable!”

The Rip Curl GromSearch 2013 is sponsored by Skullcandy, Shapers, Sticky Bumps and GUS FOUNDATIION. Media support was provided by Surftime and Magic Wave and the event is sanctioned by Asian Surfing Championships.