Padang Padang, Bali – An elite group of tuberiding specialists gathered at Padang Padang beach on Sunday for the opening ceremony of the 2012 Rip Curl Cup. They came from as far away as Tahiti, Hawaii, California, Australia, New Zealand, South Africa and Brazil to draw their heats and find out who they will surf against in the opening round of competition. 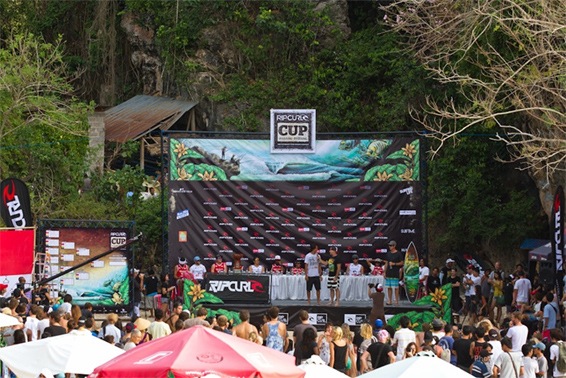 The largest crowd in event history showed up at Padang Padang to watch the presentation and press conference with the 32 invited surfers – 16 of Indonesia’s best and 16 of the world’s top tube riders. The opening ceremony marks the first day of the six-week event waiting period, and means that all 32 invited surfers are now on-call to be at Padang within 24 hours notice if event directors decide to give the green light to run.

The opening ceremony was capped off with the traditional Balinese kecak dance performance, to ask the Balinese gods for permission to hold the contest at this sacred spot and for a massive Padang swell to arrive during the waiting period. The kecak dance, always a fan favorite, is also a highlight for the surfers, said defending Rip Curl Cup champion Lee Wilson. 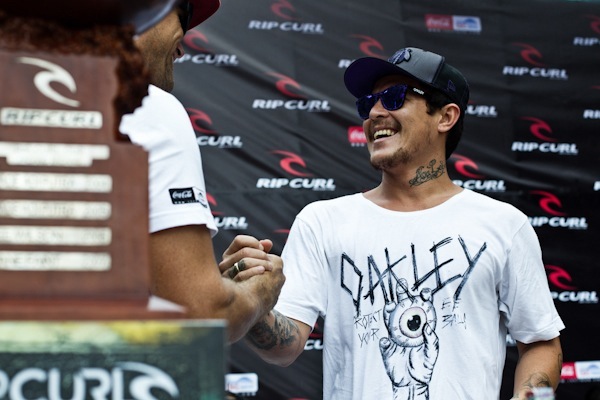 “Coming down here and seeing all the people on the beach and watching the kecak dance, it always gets me pumped because I know I’m going to be pulling into some big Padang barrels soon,” Wilson said. “This is the first year I’ve been able to take my daughter to the opening ceremony. It’s cool to be able to share this with her. She loved it.”

Contest organizers devised the heat drawing so that each four-man heat features two Indonesian surfers and two international surfers. Rip Curl has also left four spots open in the contest for two mystery wildcards, to be announced later in the waiting period, and the two winners of the locals-only Bukit Trials.

After the draw was complete, two-time Rip Curl Cup champion Made “Bol” Adi Putra found himself in Heat 8 one of the mystery international wildcards.

“I have no idea who it is,” Bol said of the mystery wildcard in his heat, “but for sure it’s going to be someone dangerous. This contest is invite-only. Everyone in this event is the best of the best tuberiders, so they are probably saving that spot for a really gnarly guy.”

A series of powerful Indian Ocean swells are headed towards Bali and contest directors are planning to run the Bukit Trials at either Padang or Uluwatu on Tuesday when the first swell is forecast to hit. The next swell is scheduled to arrive on Thursday and is expected to be much larger. Contest directors are monitoring this swell closely and eyeing a possible Thursday morning start to run the 2012 Rip Curl Cup at Padang Padang. Stay tuned to www.RipCurl.com for official event status updates.

Padang Padang was the site of a much-needed beach cleanup organized by Rip Curl on Friday, July 13th. Volunteers were joined by Rip Curl team riders and together they collected over 50 extra large bags of trash from the beach, the car park, and the valley behind the beach. Thanks to all the volunteers who pitched in and got their hands dirty on Friday to help clean up one of Bali’s most beautiful beaches and the home of the Rip Curl Cup.

Watch All the Action

You don’t have to be in Bali to see the best barrel-riding show of the year. Check the Rip Curl Cup website to see the official event status and find out when “It’s On.” On contest day, Padang Cup fans around the world can watch round by round video highlights on the site. Also check the website for in-depth interviews with all the invited surfers and daily video features on all the hottest surfing, parties and happening in Bali during the waiting period. See it all at www.RipCurl.com.

Every year the Padang Cup T-shirt is one of the most popular items in Rip Curl stores. This year, when you buy your official event T-shirt, you are also helping to protect the waves at world-famous Uluwatu and Padang Padang. For every Padang Cup event T-shirt sold, Rip Curl will donate a portion of proceeds to Eco Surf Rescue Uluwatu (ESRU), the environmental organization creating sustainable waste management solutions at Uluwatu beach. Last year Rip Curl donated IDR 54 million (US$5,465) to ESRU from the sale of the 2011 Padang Cup T-shirt. Purchase your piece of surfing history and help us ensure that the perfect tubes of Uluwatu and Padang Padang are clean and healthy for generations to come.

About the Rip Curl Cup

Now in its ninth year, the Rip Curl Cup Invitational at Padang Padang is Indonesia’s longest-running surfing competition and the only ISC tour event featuring top international surfers alongside Indonesia’s best. The field of 32 surfers is split equally between 16 of Indonesia’s all-time greatest and 16 of the world’s best barrel riders. This invitational format, along with the allure of the wave at Padang and a $10,000 prize purse, makes the Rip Curl Cup the most anticipated event of the Indonesian surf season.For 2012, Rip Curl has extended the event waiting period to a grand total of six weeks to ensure catching an epic swell for the “one-day, one-swell” event. This year’s window will run from July 15th through Aug. 26th and the contest will be run entirely on the chosen day. When contest directors see an ideal “Padang swell” in the forecast, they will give the green light and the 32 competitors will have 24 hours to make it to Bali’s Bukit Peninsula.

Real-time contest status and updates can be found at http://asia.ripcurl.com/padangcup12

Media inquiries should be directed to: media@ripcurl.co.id